The head of the Court of First Instance of Girona has applied to a Romanian marriage established in the Catalan city the Second Chance Act of 2015 that allows to free individuals and self-employed from their debts and has dictated the exoneration of the entire dissatisfied liability.


The order states that the debtors meet the requirements required by law to qualify for the Total Exemption from Unsatisfied Liability Benefit (BEPI) due to their low economic capacity. The couple thus requested the "benefit of exoneration of dissatisfied liabilities" and the insolvency administrator was not opposed, so the judge has agreed to grant the benefit of exemption in a car dated February 8, 2018 against which it can not be resource and being the first case of this type that is resolved in Girona. Those responsible for Repara Tu Deuda, the first company to apply the Second Chance Act in Spain, explain that the Romanian couple, Costel Remus and Ionela María Moldovan, arrived in Spain in 2012 and both found work. "Soon," they said, "she lost her job and they started asking for small loans to survive until there was a point where they could not pay them back." The total amount of the debts that came to agglutinate between both exceeded 24,000 euros, reaching a duty to more than 15 banks and financial institutions.

So the time passed until they found the payroll seized and "every time they checked the balance they had pending with their creditors they saw that it increased exponentially".
Without property, family or help to take refuge in and with all the closed credit access roads, they were about to return to their country, but then they decided to initiate a debt release file, "which has culminated in the annulment of the same thanks to the Second Chance Act ".
This law, which came into force in July 2015, allows individuals and self-employed individuals to be exempted from paying debt to creditors, provided that it has been shown that they have acted in good faith, and tried to reach an agreement with the creditors to postpone the debt. payment schedule less than ten years or pay it through the transfer of goods. If this agreement is not reached, they can request a bankruptcy proceeding with the mediation of a judge and request the partial or total exoneration of the debt before the court.
"It's still a little-known route," says Alicia García, a partner in Repara tu Deuda. "Not only by citizens but even by lawyers and judges." In any case, more and more people know and accept this procedure, which "opens a prospect of hope" so that those who have gone bankrupt get to start from scratch without having to drag a situation of insolvency throughout their life. lifetime. 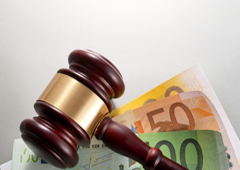