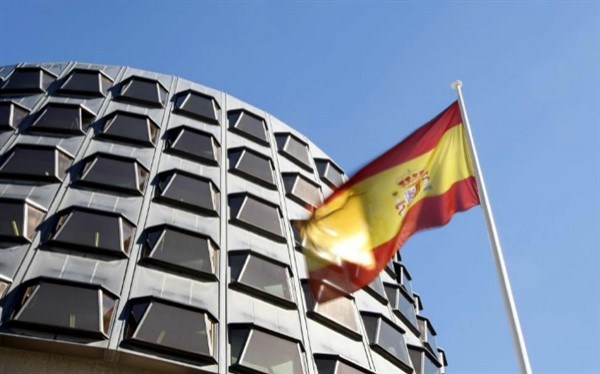 The Constitutional Court supports the establishment of rates for the exercise of judicial actions, but considers that the amounts are disproportionate and believes it can produce a deterrent effect on citizens when going to court of Justice
Drubbing the Constitutional Court to court fees approved by former Justice Minister Alberto Ruiz-Gallardon. The Plenum of the Constitutional Court, unanimously, has partially upheld the appeal filed by the Socialist Group of the Congress of Deputies against the Law 10/2012, of 20 November, amending certain rates are regulated in the field of Administration of Justice and the National Institute of Toxicology and Forensic Sciences.
In a judgment dated July 21 and made public this Friday, it states that the fees are unconstitutional and void by virtue of their amount. Specifically, the court annuls the amounts of this levy fixed for both access to the courts as to the filing of appeals on the grounds that violate the right to effective judicial protection, governed by Article 24.1 of the Spanish Constitution.
As explained by the Constitutional rates are affected by this ruling required only to legal persons, since, as pointed out, reform of the law by Royal Decree Law 1/2015 of 27 February, which led out the current minister, Rafael Catala exempted from paying tribute to individuals.
Amounts that will be affected
Specifically, the judgment annulled the payment of fees are set out in Article 7.1 of the law, where the following fixed quotas are foreseen: the 200 euros for lodging an administrative litigation abbreviated resource and 350 euros to appeal ; ordinary administrative litigation the 800 euros to promote appeal and 1,200 euros for extraordinary appeals for procedural infringement and, in the civil order; the 800 euros for the appeal and 1,200 euros for the appeal in any of its forms, in the contentious-administrative order; as well as the invalidity of the rate of 500 euros for the 750 and then appealed for cassation in all its forms, both the social order.
Has also been declared unconstitutional Article 7.2, which imposes a variable fee whose amount shall be obtained by applying the economic value of the dispute the tax rate applicable, according to the following scale: 0 to 1,000,000 euros, 0.5 %; the remaining percentage rate of 0.25; with a variable maximum of 10,000 euros.

The Court clarified that, under the principle of legal certainty, the declaration of invalidity of the rates take effect "pro future", ie, that only apply in relation to new cases or procedures where it has not fallen only a resolution firm.
The judgment does not order the refund of amounts paid in connection with the declared rates void or procedures completed by a final decision nor in unfinished in which the payment of the fee was satisfied without being challenged by breach of Article 24.1 of the Constitution. In fact, in the latter case, the absence of a challenge to the rate gave firmness to the settlement of the tax.
Rates yes, but not so high
In its judgment, the Constitutional Court clarifies that the establishment of fees for the exercise of prosecutions in-contentious administrative civil, and social orders not infringe, in itself, the fundamental right of citizens to an effective remedy (Article 24.1 of the Constitution); does not violate the mandate of submission of the Administration to judicial review (Article 106 of the Constitution) nor the principle of free Justice (Article 119 of the Constitution).
In this regard, the ruling states that the legislature is free to regulate the requirements of free access to justice, provided they guarantee the exercise of this right to those who have insufficient resources to litigate. Now he considers that the amount of the fees (both fixed fee and variable) you are disproportionate and can produce a deterrent effect on citizens when going to court of Justice in the exercise of their fundamental right to protection effective judicial.
Moreover, the Constitutional understood that the aims pursued by the contested law, the judgment says, are constitutionally legitimate. So with the first one, which is to avoid "situations of abuse" that generate those who do not seek the protection of the courts but advantages by delays in the proceedings; and the second, which is the mixed funding of Justice. Regarding the latter, he says, its legitimacy because the taxable event is taxed at the rate not the public service of justice (understood as provision of material and human resources), but the "exercise of judicial power". Through processes in each of the jurisdictional orders, it materializes "daily the role Constitution entrusts exclusively to the organs of state power (...) such as the judiciary".
However, the court notes that the legitimacy of this second purpose can not assume the introduction of excessive charges that preclude access to justice. Therefore, the Court should also examine the proportionality of the measure. According to the constitutional doctrine, that a legislative measure is considered proportionate, you must meet the requirements of suitability, necessity and proportionality in the strict sense.

Objectives which justify rates
In this case, the measure is not suitable for the purpose of ending the abusive actions. In fact, being a fee system in which everyone pays the same, your goal to prevent or deter the filing of abusive actions "diluted for anyone who has sufficient economic means"; and yet, "harms the defendant to properly exercise their right to appeal," which is forced to pay a fee with which aims to eradicate a behavior that is alien. The inability to establish a prior control over resources, the court said, "can not justify the indiscriminate imposition of that fee, under the support of a deterrent purpose against a disease to minority accounts."
In addition, the Constitutional remember that our system already foresaw a deterrent, as is the deposit to appeal. The judgment concluded that the imposition of the fee is not suitable because it does not meet its objective and because there are no objective reasons justifying the imposition of a new deterrent for an alleged lack of efficacy of deposits.
On the contrary, the judgment does understand that the imposition of the rate itself is a suitable measure for achieving the second end, the joint funding of justice. And it is also necessary, according to the court, because there, notes, there is an alternative to the rate for the purpose of "fixing a financial responsibility on the part of anyone who generates the procedural activity whose realization produces a cost to the State ".