Insult your boss is not always a dismissal 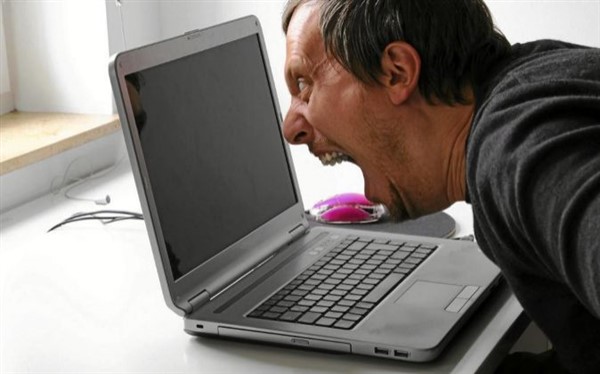 Some companies justify the dismissal of an employee after seeing certain comments made on their personal blogs or social networks. Judges admit when they are abusive and routine.
Football and politics are two of the most common targets of our anger, but so is the work. Mess with the boss, colleagues and even customers once reserved to the private sphere, but its impact social networking has increased, even though many people consider purely personal profile on Facebook and Twitter or your personal blog .
These unfortunate comments have caused, however, that some workers end up on the street. Judges have a tough task in assessing whether it is a dismissal or unfair when insults and defamation involved, as it is called into question freedom of expression and how far. Therefore, an expletive does not always justify immediate dismissal.
"Citizens should be aware that even if they consider social networks as a private matter, a publication on them after hours can also cost you the job," warns Alberto Madame, labor partner of Baker & McKenzie, who insists the difficulty of establishing where the limits of freedom of expression are.
Intensity
One of the first arguments with judges consider to determine if this is inappropriate or dismissal from the intensity of insults. It is not so much the type of taco, since in Spain even those who are stronger are lightly used sometimes with friends without any offense.
Therefore, the partner of Baker & McKenzie explains that it is more important to see if this is an occasional comment or insults have been repeated several times.
Context
Although you can not talk about mitigation in the strict sense of the word, the judge also appreciates the context in which there have been insults. For example, when a company is in the industrial dispute with its employees or any part thereof, such as a redundancy or negotiation of a new collective agreement is often a time especially problematic in some outbursts are caused by both parties.

Freedom of expression
One of the fundamental rights protected by the Constitution in its Article 20.1 is the expression. However, this does not give carte blanche to the citizens to say what they please invoking this right. Complain about a given situation, for example, does not justify a dismissal, but insults in its intensity and the context in which they were released would be valued.
Any resemblance to reality is pure coincidence
Freedom of expression covers criticism, but no injuries or slander. This was the conclusion the Superior Tribunal of Justice of Madrid reached by determining the origin of the dismissal of a teacher for using his personal blog to publish insults and disrespect.
The teacher appealed the decision because it considered that the comments lacked gravity and that the dismissal violated his freedom of expression, arguing that the characters were fictional. But did not include the name, the judge ruled that the nicknames and references was made to be easily recognizable.
Although he eliminated the blog as someone said he was offended, the judgment states that the literature teacher should take the usual precautions taken writers and collect as common phrase in the fiction of "the characters are imaginary and any resemblance to reality is purely coincidental. "
You from
• graphic evidence One of the top managers of a supermarket decided to publish on Facebook a series of photographs in which she looked dressed in uniform posing next to the safe with wads of cash or bottles of alcohol. The firing was coming because the images not only affected the right business image to appear in the same logo, but violated any preventive measure against possible assaults.
• Mafia Threats An employee barricaded under the name 'La Cosa Nostra', requested in a forum who knew the full name, address and telephone number of your boss made public, "what else" he already responsible: "I especially would set us up." It is an appeal to the intimidation of a manager in the private sphere, and that expressions refer to violence. In addition, the effectiveness of the threat is reinforced given the anonymity in which the worker is shielded.
• harmful Reviews A pilot was relieved of his post of commander, which led to several comments published on a website that damaged the prestige of the company to impute serious irregularities based on information not proven and not true. The worker claimed, inter alia, that the crew flew in fear of being punished, leading to accidents. The judge found that was taking undue damage to the honor and image of the company.
unfounded
• Labour dispute Being in the middle of a labor dispute, which involved a change in distribution of services and worsening working conditions justifies to some extent the negative comments made by an employee in his Twitter account. The Superior Court of Navarra also appreciated that his views were not particularly insulting or slanderous: "If you want war going to have," "those who play with fire burning just" or "employees are up to the hilt of oppression" .
• Sporadic make humorous comments of customers of the company in which you are working on a Facebook page can be considered unfair dismissal, if the behavior is sporadic. The Superior Tribunal of Justice of Madrid understood that the comments were not of sufficient gravity to take the employee, who three times had experiences I had in the store in the group 'Ladies who go to relieve the afotos Fotoprix'.
• Reversing Using Facebook tab 'Training and employment' to mess with the company does not seem a good idea. This was realized by easyJet, which at first considered that the comments of one of his employees were offensive, defamatory and humiliating to the airline. The "fuck easyJet" he wrote in his profile for the network led to the departure of the worker, but then the company recognized the illegality of the dismissal.