They grow declared bankruptcy proceedings and filed in the same edict

Insolvency proceedings reported and concluded in the first half of 2006 in Madrid and Barcelona continue to decline.
A growing number of bankruptcy proceedings declared and stored in the same edict. Although the overall number of competitions still falling, namely 39% in Madrid and 33% in Barcelona in the first half of the year, the same has not happened in insolvency proceedings reported and concluded in the same car. They have reached the figure of 126 in Barcelona and 55 in Madrid, maintaining the same amount as in 2015, although representing an increase of 35% and 19%, respectively, due to the decrease in total contests this year compared with the past . This is shown in the semiannual report Insolvency Administration. Evolution of designations in 2016, Insolnet Bankruptcy Solutions.
Because of the role they are charging contests declared and concluded in the same edict, in which no administrator is appointed, the number of designations of insolvency administration has decreased.
As for the assets of bankrupt companies, it has fallen 52% in Madrid and 51% in Barcelona. The three companies of Madrid more active according to data from the latest accounts filed with the Companies Register are Company for Real Estate Development City Híspalis (105.4 million), Antigua Rehabitalia (58.5) and Alvi Real Estate Group Corp ( 49.2). In Barcelona, ​​Arganda & Polish Stocks Holdings (55.8 million), Argenta (54.4) and Grafos (33.8).
The number of individuals declared insolvent has been 49 in Barcelona and 23 in Madrid in the same period. 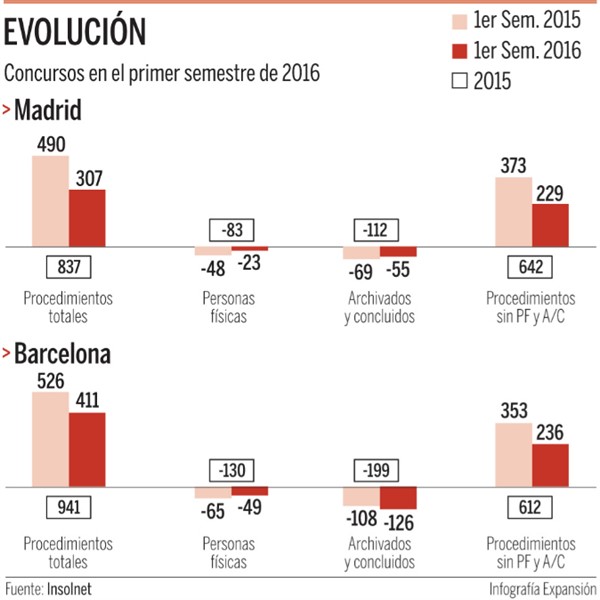